The Daily Drive is a daily (duh) post of all the prominent things going on in the sports world we didn’t cover, and anything else we might want to share with you. Like how to win a sword fight. I’ve been watching lots of Game of Thrones, my technique is flawless.

– Speaking of Game of Thrones, HBO has another tremendous show. Here’s a clip from the last episode of a guy chopping a horse’s head off, if that doesn’t make you want to watch then I don’t know what will.

– Sad day for baseball as Harmon Killebrew passed away. He played before any of us were born, but he had some ridiculous stats and was known as one of the better people in baseball, RIP.

– New York, New York. The Yankees lost their sixth…SIXTH?!?! straight game, falling into a three-way tie for 2nd place in the AL East. AJ Burnett blew up, and Jorge Posada said he wanted to leave the Yankees due to all the controversy surrounding his day off the other night. Almost as bad a day as the Mets had, who lost 2-1 in 11 innings when Marlins reliever Burke Badenhop got a game winning two-out single. Typical New York night I guess.

– Last night the Phillies offense sucked, the umpire’s strike zone was the size of a triscuit, and all objects around my house no matter of cost are officially in danger of being broken every time I watch the Phillies.

– More treats after the jump. – Arnold Schwarzenegger fathered a child with a “household staffer” and has kept the secret for over ten years.

So let’s recap his life. He was the youngest winner of the Mr. Universe bodybuilding contest.

Then he started acting. These pictures show that his movies were….well….weird as hell.

He became the Governator of California and now he has a love child from a maid? Arnold, I want to personally thank you for coming to America and making all of us realize how weird Austria must be. 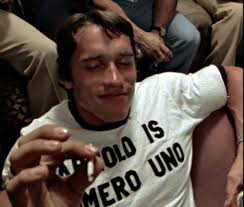 – A bunch of Mexicans playing soccer got into a fight last night. Mexico’s national team goalie Jose de Jesus Corona landed one of the most amazing headbutts I’ve ever seen.

– Since I posted so many pictures of Arnold I feel obligated to post at least one hot girl. Here’s Gretchen Rossi who stars (?) on one of those gay housewife shows.