The third place Los Angeles Dodgers come to Philadelphia to face the team with the best record in Major League Baseball…Still? Really? Even after losing 2/3 to the worst franchise in baseball? Well it’s cool, but what the hell is the rest of baseball doing, because the Phillies haven’t been doing anything well lately*.

*Except when God aka Roy Halladay pitches. 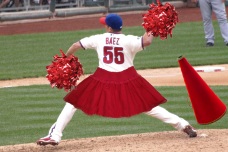 So losing two out of three to the Pittsburgh Pirates isn’t very good. The corpse of Kyle Kendrick was on the mound for one of those loses so I guess that’s how that one can be explained. The extra inning loss? Frustrating. Jeff Karstens was throwing 85mph and the Phillies lineup managed to make him look like Nolan Ryan. Then the game then ventured to the Phillies new favorite trend, extra innings. Unfortunately the extra-inning long man extraordinaire Danys Baez blew it. Stupid Charlie he should have just gone right to Willy-Fresh to shut the door!

Next on the schedule is the Los Angeles Dodgers. It’s always interesting when your going up against pitchers named Rubby and Hiroki. The Dodgers and Phillies have seen a lot of each other over the past few seasons. It started back in the 2008 NLCS when Brett Myers gave Manny Ramirez a little sweet chin music. Then it continued in 2009 as the underdog Phillies beat up on the Dodgers to go to their second straight World Series. But since that 09′ series Manny Ramirez took some funky stuff and grew a vagina (right?) then retired, Brett Myers is an alcoholic/crazy person pretending to be a MLB pitcher for the Astros, and the Dodgers didn’t make the playoffs last year. Sadly the rivalry, if you can call it that, ended abruptly. Since this minor rivalry disappeared things have really gone downhill quickly for the Dodgers. Bud Selig took control of the Dodgers due to troublesome ownership, some scumbag Dodger fans put a guy into a coma, and attendance at Dodger stadium is down over 7,000 people per game from last season. Pretty much Los Angeles, you’re not running well.

Keys To The Series