This is my five part series in how to buy a sports jersey. I didn’t plan for it to be a series, but like your Mom didn’t exactly plan for you, these things happen. Also, I’M BACK! Click here for Part 1. And here for Part 2.

Trades are the quick fix in the sports world. Sometimes it’s to get the team through a tough patch early in the season when your first basemen just tweaked his ‘bo. Other times it can be halfway through the season when one of the classiest organizations in the world embarrassed it’s All-Star goalie by leaving him out to dry, and then trading him in a deal that would change hockey in the Western Conference (and this young bloggers life). Trading for a player is a bit like getting into a new relationship. There’s the fun, not quite awkward, not quite awesome early stages. You go out, get ice cream (game winning goal two games after trade) or maybe just check out a local museum (perfect game first time facing your old team) and just stick to the casual making out (joking around and pranking your new teammates.) But about a month in, you need to do something that can be the scariest three words to some people: Define The Relationship. (Yes, I may have stolen that from the MTV show, “Awkward”, which I could have possibly gotten hooked into after flipping on the TV one day. Sorry, I have a thing for high school girls. I appreciate innocence. I’m only human.) You see, there are two types of trades in modern day sports: one for right now, and one for down the line. One fail, one exception.

The Reason it Fails

You’re team is fire. You guys won it all two season’s ago, and last year made the Conference Finals. You’ve got most of the team intact, but something is missing. The spark plug, the rabble rouser; you need to reignite the fire in your team and remind the fan base that you care. So you mortgage your future for right now, trading a top prospect and a draft pick for a failing teams star player. Things start off well, and the guy seems to be clicking. The fans notice, and next thing you know his jersey is flying off the shelves. He get’s cheered every time he touches the ball/puck/assistant coaches neck. It’s like he found his new home, and him and his new brothers in arms enter the dirty, oppressive war known as the playoffs. And fail. Two months later he signs for big money with a washed up, wanna-be top organization. His jersey forever hangs in your closet, a reminder of how easily you got roped into the hype. 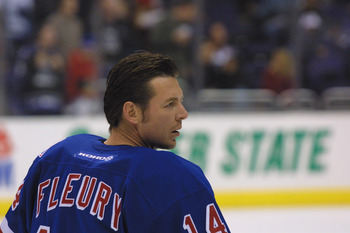 You didn’t bring this guy in for this season. You brought him in for the next 5 seasons. He’s not the missing piece in the puzzle that is your team, he’s the god damn picture on the box. He’s one of the new faces of the franchise. He’s the new leader in the locker room. You don’t expect him to score goals, you expect him to win games. The exception is hard to pinpoint, but there is usually some warning signs. Obviously contract is the big one (basically rule# 1, dropping on Wednesday… probably.) So is your team’s needs. There’s a difference between trading for a pitcher who is going to support your Number 1, and trading for your new number 1. Yes, a perfect example for this is Roy Halladay. Don’t say I never showed you any love, Phillie phans.