Shit That has happened since I Last Posted

Well well well…..it has been quite a while since I have had the motivation to write anything in this space and I really don’t have any excuses except that I am lazy as a sloth.  Just to bring you up to speed here are a few of the highlights/lowlights in my life since my last post on March 13th 2012.

Chase Utley and Ryan Howard missed half a season

Cole Hamels Made a lot of money

END_OF_DOCUMENT_TOKEN_TO_BE_REPLACED

I should be excited I guess.  We locked up one of the best closers in the game to a long term contract basically for the same amount that we paid Brad Lidge to rehab his shoulder/knee/elbow/ego the last three years.  Ruben and the rest of the front office basically decided that they were not going to pay close to 50 million dollars to Ryan Madson to become the closer, based on less than one solid year of doing the job.  While Madson was tremendous this year, he doesnt have the history that Papelbon has, and when you are shelling out 50 million to someone, it better be a sure thing.

Ok...maybe i could root for this guy

I have to say this one is a little tough to swallow for me.  Madson was easily one of my favorites on this team.  I got an opportunity to go to spring training this year and sat in the berm in the outfield near the Phillies bullpen.  He was in there cracking jokes, signing autographs and basically being the all around good guy that everyone had grown to love over the course of his career in Philly.  Not that this helped him win games, but its always nice to have someone on your team who is a nasty reliever and good person to boot.  I will always remember the 2008 run to the title when he seemingly gained about 5mph on his fastball.  He was the bridge to Lidge and he did a damn good job of it.  His new found dominance was one of the key aspects to why the Phils won it all that year.

Now I have to root for a guy that i made a living making fun of for about 5 years.  I hated the stupid dance he did in the World Series.  I hated “Shippin up to Boston.”  I hated how long it took for him to throw a pitch.  I loved when he blew the Red Sox season this year.

I can only hope he has the right frame of mind to change his entrance song.  Which is about 50% of the reason i either like a closer or hate him.  One of Madson’s weaknesses was his entrance music of “Dont Stop Believin” by Journey, which was corny as hell.  Lidge had some crazy heavy metal which is par for the course in the world of closers.  I have a few suggestions for Jonathan that may help him endear himself to the Philly Faithful.

Suggestions after the Jump

END_OF_DOCUMENT_TOKEN_TO_BE_REPLACED

So I haven’t been doing a whole lot of blogging recently for a few reasons.  One being that my soul is still crushed from the Phillies losing to the Cardinals in the playoffs.  Yeah I know it was over a month ago, but to be honest with you its going to continue to piss me off until A. I either die or B. the Phillies win the World Series very soon.  So being the depressed curmudgeon that I am nowadays, I am going to debut a new series of posts that are sure to remind you just how much things suck.

It happens every year.  Team starts slow, people want Andy Reid fired, Jon Gruden’s name keeps popping up.  Then they go on a little run, start playing tough, hard nosed football and win some big games in December.  They do just enough to suck you back onto that bandwagon.  Then you know what happens?  The playoffs come and Andy inexplicably forgets how to use timeouts/challenges, starts busting out his idiotic repertoire of trick plays, and looks as confused as Jerry Sandusky in his mug shot.  You know what Andy!? Not this year!  ::checks Eagles schedule….realizes we could win our next 5 games….starts crying::

END_OF_DOCUMENT_TOKEN_TO_BE_REPLACED

The “Genius” Does it Again 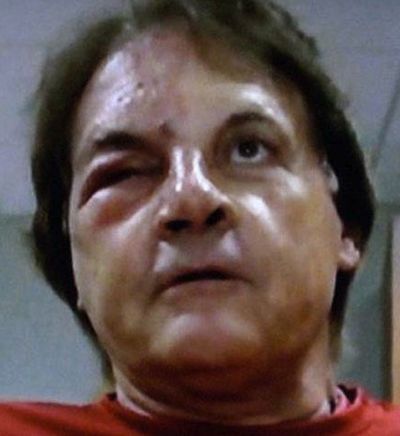 So the Cardinals will be representing the NL in this years World Series.  Not that I give a shit.  My baseball fandom for the year died shortly after Ryan Howard’s Achilles exploded.  I was nervous to play the Cardinals all along.  Anyone that said “Oh it doesnt matter who we play, the best team always wins” is a idiot ::hanging my head in shame::.  If you have a chance to literally pick your opponent in the playoffs and that opponent would have been the fucking Diamondbacks, why don’t you do this?!?!?!  AHHHH it still infuriates me.  No, we had to play Albert Pujols, Lance Berkman, Matt Holiday, Chris Carpenter, as well as Rafael Furcal who is rocketing up my list of most hated athletes.

END_OF_DOCUMENT_TOKEN_TO_BE_REPLACED

The Daily Drive “The Day The Earth Didnt Stand Still”

The Daily Drive is a daily (duh) post of all the prominent things going on in the sports world we didn’t cover, and anything else we might want to share with you.  Earthquakes are so 2010.

-So lets get this right out of the way.  An Earthquake hit Virgina today.  The world moved on.

-The NY Football Giants already depleted secondary lost yet another CB today.  After losing impact player Terrell Thomas last night to a torn ACL, they lost CB Brian Witherspoon to a torn ACL as well.  Somehow Papa Bear seems to think that this will not effect the Giants at all.  He won’t give me any facts to support this argument (or words on this site for that matter (Shots Fired Shots Fired!)), but he is deliriously confident in his team right now.

Cliff Lee, Big Willy Style, and an attractive female after the jump

END_OF_DOCUMENT_TOKEN_TO_BE_REPLACED

The Daily Drive is a daily (duh) post of all the prominent things going on in the sports world we didn’t cover, and anything else we might want to share with you.  Its cool Plaxico, we didn’t know who Mayor Bloomberg was either.

-Lets start things off with a bang this afternoon.  Mark Sanchez apparently wanted to fight Rex Ryan after almost being benched during last season.  I’m no PR genuis but this isnt exactly the approach I would have taken when being interviewed about the upcoming season.  Especially since Rex is a Fan of UFC.  His go to move?  You guessed it, The Ankle lock…gives him a close up view of his favorite body part.

-Osi Umenyiora apparently is tired of faking an injury and will start practicing for the New York VaGiants.  Giants are having an outstanding off-season by the way.  Kevin Boss, Steve Smith, Shaun O’Hara and Rich Seubert are all gone along with their top draft pick Prince Amukamara who is out for a few months with a broken foot.  When i asked our resident Giants Fan, Bruno, what he thought of the activity he left me with this gem “YEAH WELL WE HAVE THREE SUPERBOWLS!”  Denial is an awful thing.

-Jeremy Maclin apparently isn’t dieing and will give an update on his overall health tomorrow at some point.  One has to wonder though about all the lost weight and secrecy.  Its OK Jeremy, Just tell them that the Nutri-System diet works great!

-Howard Eskin, 610 WIP sports radio afternoon host, has announced that he will be exploring some national offers and will not be doing his daily show anymore.  Good Riddence Howard, you insufferable prick.  I truly wish Charlie Manuel whooped your ass a few years ago.

Sidney Crosby, Big Ben and Halle Berry after the Jump

END_OF_DOCUMENT_TOKEN_TO_BE_REPLACED

You Dropped a Bomb on Me……Baby

You gotta love living in 2011.  Forget about the Debt crisis, world famine, humanitarian issues, party politics, and everything else that just seemingly wants to depress the shit out of you, life is good.  In my opinion there has never been a better time to be alive.  Last night I was doing things I never thought I would be able too even five years ago.  Simultaneously I was watching the Phillies in HD from Los Angeles, drinking a delicious micro brew from Nantucket, and listening to the Phish webcast from Lake Tahoe.  Technology is pretty sweet.   You wanna know whats even sweeter?  Cliff Lee going yahtzee off Ted Lilly for his 2nd HR of the year.  Bartledoo(who once used to blog here before he got to big and started focusing on his main gig at mysecretboston.com) and myself were sitting there just admiring the practice cuts that Cliff was taking.

END_OF_DOCUMENT_TOKEN_TO_BE_REPLACED

Saw this video earlier this morning on CNNSI in Hot Clicks.  Soccer players never seem to amaze me with their fighting tactics.  Some one throw a goddamn punch.  Obviously the flying Street Fighter kick is the low light of the video, but just look at those assholes dancing around trying to kick each other.  They do know that they are allowed to use their hands right?  Just another reason soccer will never be popular in The USA.

God he has beautiful eyes

End of the day got real busy for CaptainDan yesterday.  I didn’t get a chance to do the Daily Drive which disappointed the millions of fans this blog has.  Although I did manage to put in a call to everyone’s favorite 2nd basemen.  It went a little something like this:

END_OF_DOCUMENT_TOKEN_TO_BE_REPLACED

The Daily Drive is a daily (duh) post of all the prominent things going on in the sports world we didn’t cover, and anything else we might want to share with you.  For example: The average person spends 3 years of their life on the toilet.  Once again, I am above average.

-According to Fortune Magazine, Tiger Woods is apparently going broke.  I don’t know, when Fortune magazine is writing about how you ONLY got paid a couple million for doing some ad in Japan, that doesn’t really make me feel for EL Tigre. You want to know broke Tiger?  The lady at the Wendy’s Drive thru calls me by my first name.

– The Vanimal continued his Major League dominance last night as the Phil’s spanked the Mutts 7-2 at Shitty Field.  As Timmy mentioned yesterday, K-Rod is now gone, leaving me with one less Met to make fun of now.  The highlight of this story is that K-Rod apparently had a list of 10 teams that he didn’t want to be traded to, and the Brewers were one of them.  The Mets response?  “We didn’t know about a list.”  YOUR NEW YORK METS LADIES AND GENTLEMAN!

Chrissy Teigen, J-Lo and more after the Jump