Glad I got the pitchers this year because the Phillies hitting right now is a downright mess. Luckily the Phillies still have a couple of guys who know how to throw the baseball. If they lose this ability….Well, the Phillies are fucked. The Phillies pitchers have to (and most likely will) carry this team once again. On to the previews.

END_OF_DOCUMENT_TOKEN_TO_BE_REPLACED

As I watched Alex Rodriguez strike out to close the book on the Yankess 2011 campaign last night, i felt a eerie sense of caution.  Normally i would have howled with delight that my least favorite player had just blown the season (twice…K with the bases loaded a few innings before).  Normally I would be giving faux masturbatory motions towards all Yankee fans within 5 miles.  Normally I would have sent arrogant text messages to all of my Yankee fan friends illuminating that the reason A-Rod failed was because he missed Kate Hudson and her strap on.  This didn’t happen though for a variety of reasons.  The most important being that I am a nervous wreck.

"Yeah we dont know what you were thinking either Penny Lane"

END_OF_DOCUMENT_TOKEN_TO_BE_REPLACED

The Daily Drive is a daily ( for the most part) post of all the prominent things going on in the sports world we didn’t cover, and anything else we might want to share with you.  For example:Japan has come up with a steak made out of feces that is completely edible.  I only wish I was kidding.

The Phillies open up a series against the St. Louis Cardinals tonight.  No truth to the rumor that the St. Lunatics will be performing take me out to the ballgame in the 7th inning stretch.

Jack Mckeon didnt take long to start cracking the Fish into shape.  He benched Hanley Ramirez in his first game back as manager.  Presumably it had something to do with Hanley not giving a flying fuck about baseball this season

Doug Hutchinson 51, the actor from Lost and the Green Mile,  married his 16 year old girlfriend in Las Vegas Last Month.  Hugh Hefner was quoted as saying “My Man….”

Vanessa Hudgins, PoopSteak, and more after the jump

END_OF_DOCUMENT_TOKEN_TO_BE_REPLACED

It’s hot outside, there’s a high of 99 today in Philadelphia. Hot weather=miserable. For those who didn’t make it pass kindergarten the opposite of hot is cold. Cold weather is also miserable, unless it’s air conditioning, but now we are getting a little too in depth. Anyway, the Chicago Cubs are what you call a “cold” team. They are coming off an eight game losing streak, and now the Phillies get to play them for four straight games. In the words of the late great Notorious B.I.G. …… Juicy.

END_OF_DOCUMENT_TOKEN_TO_BE_REPLACED

Wait. Roy Halladay, Cliff Lee, and Roy Oswalt pitched in a three game series versus the Washington Nationals, and we lost the series? What. The. Fuck.

END_OF_DOCUMENT_TOKEN_TO_BE_REPLACED

Yes I know, I know, we have been draggin some serious ass on the posts as of late.  But you know what Internet? We have jobs! Were up every morning at 7am riding that stationary bike getting ready to do big things!  Well either that, or we are lazy (i’m betting on the latter).  I will be in attendance for Phils/Reds game this evening.  Big Roy will take the mound against Cincy for the first time since this happened (which I was also in attendance for) last year.  Now i’m not expecting a No-Hitter but I am expecting Doc to be his dominant self once again.  He matches up against Travis Wood who last time out against the Phils at CBP had a perfecto going until the boys in red pinstripes stormed back for the W.  Travis isn’t having as good as a year as many expected with that 5.17 ERA he is rockin.  He was probably pumped that he would have a chance to face the likes of Ben Francisco and Dane Sardhina tonight but not so fast my friend, we got the golden boy, Domonic, and the chosen one, Chase, back in the lineup for the third game.  It’s kind of crazy that it’s almost June and the Phillies have yet to field the team that they expected at the beginning of spring training.  But that’s baseball.  Lets hope this game will be better than Sundays performance where I damn near fell asleep.

Keys to the Game

-Get out of Doc’s way

This will probably be my last post for a while since I will be going to See Phish 5 times in 6 days, with the only off day being my birthday (im sorry liver).  So I will leave you with this, which I am calling as Tour Opener.

Dear Ruben: Work your mind control and trade for this guy

You dropped a bomb on me....baby

I know I know, its never going to happen but I cant help but fantasize about Jose Bautista dropping 450 footers into Harry the K’s in the upper deck at CBP.  I mean if Ruben could steal Cliff Lee away from the Yankees and Roy Halladay away from the Blue Jays, whose to say he couldn’t pull another trick out of his sleeve.  Bautista did just sign a 5 year 65 million dollar extension in the off season.  But lets face it, the fucking Blue Jays suck.  Come on Jose, we would LOVE to have you in Philly.  We are sooooo tired of watching Raul flail and Ben Francisco fly out to center.  Just consider it.  I mean just looking at this page gets me almost uncomfortably excited.

Leaving Ducks on the Pond 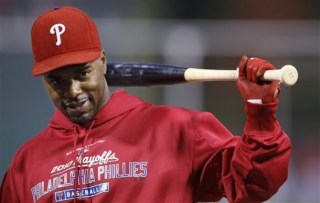 MMMHMMM i love me a first pitch fastball....

Well last night was pretty much the result everyone expected out of the premier pitching match up of this young baseball Season.  It just didn’t go according to plan.  The Phillies made Josh Johnson sweat quite a bit in the second and third innings by loading the bases.  Unfortunately they didn’t get any runs out of it.  Two errors, one being mental, by two of the most solid defenders on the team led to a Phillies loss in south Florida last night.

More after the Jump

END_OF_DOCUMENT_TOKEN_TO_BE_REPLACED

We went 2-3 again yesterday, but I have a feeling that if we stayed away from the pitch, we could’ve eeked out a winning day. Also, I think we’re going to stay away from the over/under’s for a while – despite the small sample-size, 0-2 is no bueno.

My picks are on the left.

The value is pretty awful, but Doc is a monster, and Lannan is a disaster against the Phillies. The southpaw is 0-8 with a 6.09 ERA in 11 starts against Philadelphia, and despite having to lay nearly 2-1, this bet is too good to pass up.

Jayson Werth got the first laugh last night, but Doc Halladay is no Joe Blanton

The Braves own the Marlins at Turner Field, winning eight of their last 10 by a combined score of 34-13. Additionally, Hudson has looked great in his first two outings, winning both games and maintaing an ERA less than two.

While I think the Rangers are a great value to win the series at +180, I have a feeling that the Capitals are going to dominate the first game of the series. During the last few days, Washington has had to hear all the pundits talk about how they were blown out by New York twice and lost the season series. As a fan I’m rooting for the Blueshirts, but tonight doesn’t look good for the away team.

With a win, the Lakers would lock up second place in the West and guarantee themselves home court advantage until the Western Conference Finals. If the aging San Antonio Spurs bow out in the first two rounds – which they will – then they’d have it until the NBA Finals. The loss of Andrew Bynum (SHOCKER) also gives the Lake Show an opportunity to make a statement – hey guys, we still have Pau Gasol and Lamar Odom in the paint.

Betting lines are provided by Bodog and are accurate at the time of this post.

Rich Dubee is a lucky S.O.B.  He has the job of managing 4 of the best pitchers in the game and one of the best #5 starters in history.  He basically is being paid this year to watch artwork on the bump at CBP.  Don’t get me wrong, hes one of the best pitching coaches in the game, having helped Roy Halladay and Roy Oswalt develop a changeup that makes them even more lethal (most thought this to be impossible).  His one tough job this year will be doing his best with a makeshift bullpen while Closer Brad Lidge recovers from his annual arm injury.  Life is good in the bullpen down at the Bank, Life is good.

BEST.  PITCHER.  IN.  BASEBALL.  This guy threw a perfect game on May 29th,2010 Vs. the Fish in South Florida on a night where there might have been about 11,000 fans maximum there.  He threw a No-Hitter against the Reds in his first playoff appearance (while I was in attendance no less).  He had 9 complete games, 4 of which were shutouts, threw 250 innings, had 219 Strikeouts, and most amazingly of all…..30 FUCKING WALKS.  Oh yeah and he finished 21-10 and won the NL Cy Young award his first year in the league.  Not only is he the most dominant guy in the league, he’s probably the best teammate the Phillies have had in a long time.  After he threw his perfect game he had 40 watches each personally engraved at a value of $6,000 each given to all his teammates and members of the staff.  You know what they said? “We did this together. Congratulations.”  Just recently he gave Chooch an exact replica of the Cy Young award he won because he said he could have never done it without him.  My personal favorite moment of the year though was when he pulled his groin in the NLCS against the Giants and still dominated them with about 60% of his physical ability.  Last year was just the beginning, the NL better look the fuck out