Saw this video earlier this morning on CNNSI in Hot Clicks.  Soccer players never seem to amaze me with their fighting tactics.  Some one throw a goddamn punch.  Obviously the flying Street Fighter kick is the low light of the video, but just look at those assholes dancing around trying to kick each other.  They do know that they are allowed to use their hands right?  Just another reason soccer will never be popular in The USA. 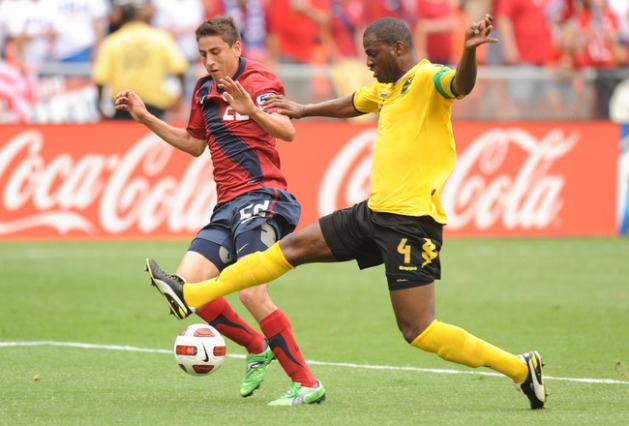 No youuuu touch it.

The United States moved past Jamaica in the quarterfinals of the CONCACAF Gold Cup on Sunday. Jermaine Jones broke the tie at the 49th, banking the ball of a defenders foot. Clint Dempsey would cash in an insurance goal later on. Volley my header, CNN –

Jones fired a shot from outside the penalty area in the 49th minute, and Jamaica defender Jermaine Taylor stuck out his foot, deflecting the ball past goalkeeper Donovan Ricketts.

Jones was in the middle of several big plays until he left the game in the 75th minute for substitute Maurice Edu.

Jermaine Jones apparently was born in Germany and played for their National team a few times before the U.S. allowed him to switch sides and join the good guys.  Not all good things came from the game, as U.S. striker Jozy Altidore left the game early with an injury.

The U.S. also suffered a blow early when striker Jozy Altidore left with a strained left hamstring and was replaced by Agudelo in the 12th minute. After the game, Bradley said he didn’t know what Altidore’s status would be for the remainder of the tournament

Not the best news for the States, but I’d rather lose Altidore now when we’re playing countries whose citizens would rather sneak into our country.

The U.S. next foe, after the jump. END_OF_DOCUMENT_TOKEN_TO_BE_REPLACED

The Daily Drive is a daily (duh) post of all the prominent things going on in the sports world we didn’t cover, and anything else we might want to share with you. Like how to win a sword fight. I’ve been watching lots of Game of Thrones, my technique is flawless.

– Speaking of Game of Thrones, HBO has another tremendous show. Here’s a clip from the last episode of a guy chopping a horse’s head off, if that doesn’t make you want to watch then I don’t know what will.

– Sad day for baseball as Harmon Killebrew passed away. He played before any of us were born, but he had some ridiculous stats and was known as one of the better people in baseball, RIP.

– New York, New York. The Yankees lost their sixth…SIXTH?!?! straight game, falling into a three-way tie for 2nd place in the AL East. AJ Burnett blew up, and Jorge Posada said he wanted to leave the Yankees due to all the controversy surrounding his day off the other night. Almost as bad a day as the Mets had, who lost 2-1 in 11 innings when Marlins reliever Burke Badenhop got a game winning two-out single. Typical New York night I guess.

– Last night the Phillies offense sucked, the umpire’s strike zone was the size of a triscuit, and all objects around my house no matter of cost are officially in danger of being broken every time I watch the Phillies.

– More treats after the jump. END_OF_DOCUMENT_TOKEN_TO_BE_REPLACED

If I went 0-5 yesterday, I would’ve contemplated quitting. I didn’t however, so here are your five picks for the day.

Picks are on the left (unless it’s an over/under).

Barca took the first leg of this UEFA matchup, and Shakhtar is going to have to play very aggressive in order to win the second. If Barca can capitalize on their counterattacks then they might hang up a crooked number today.

This is purely a gut-feeling because I don’t see Chelsea getting swept by Man U. This game will end in a draw the majority of the time, but at +235 this is a really good price to bet a really good team.

Well played Tampa Bay. It’s officially a rivalry now between you and me.

No Amar’e means no dice for the Knickerbockers against arguably the best team in the league. For the Bulls this is a great chance for Joakim Noah to return to form, and I expect him to play some quality minutes.

Love the Trailblazers with Gerald Wallace and hate the Grizzlies. Feels like a lay-up.

Betting lines are provided by Bodog and are accurate at the time of this post.

Now I've got your attention.

The Champions League 1st knockout round is finally over, and it was full of surprises. Chelsea returned to the Bridge hoping to improve upon their 2-0 aggregate score over FC Copenhagen, whereas Lyon looked to do the impossible and upset a rambunctious Real Madrid team, hoping their depth at the striking position would be enough to propel them into the Champions League Final and a chance at the coveted double. Manchester United is through to the second round, with a lovely brace from Chichirito on Tuesday, and Inter are enjoying another journey to the European 8. For a lot of sports readers, what I just said was gibberish. Braces, doubles, strikers, rambunctious; for most Americans they are just nonsensical words, but to the rest world, they are part of the most exciting tournament in sports across the globe (of Europe.) To get our readers more acquainted with the upcoming round of 8, here’s a simple comparison of each team to an American sports team, so you know who to pretend you are rooting for when you meet a liberal-arts exchange student at the bar.

Chelsea – Why not lead off with my favorite starting XI, the London Blues. Of course Chelsea are essentially the New York Yankees of the soccer world. Known for spending a ridiculous amount of money on transfers, public spats with coaches and bandwagon fans at every bar, this team is the United Kingdoms version of the Evil Empire (imagine Hal with a monocle, stove pipe hat and a shoe shiner.)

Manchester United – I fucking hate this team. Let’s leave it at that. There isn’t a player on this team that I can appreciate. They wear red. They are a machine that systematically destroys opponents by wearing them down and exposing their weakness. Regardless of who they bring in or who leaves, the team seems unchanged, a true testament to management, lead by their staunch, sometimes controversial manager, Sir Alex Ferguson. They are the Detroit Red Wings, a model of success for all sports franchises, and I hate them and wish polio upon all their fans.

Real Madrid – A storied franchise with multiple championships. The Bernabeu stadium is as famous in Spain as the Staples Center is here. Christiano Ronaldo is one of the most bankable stars in the game, not unlike Kobe Bryant. And just like the Los Angeles Lakers every person you spot in one of their jerseys is a douche bag.

Internazionale – Coming off a storied year for Italian teams in which they earned the Treble (Italian club champions, League champions, and Champions League winners), they are one of the most successful teams in soccer right now. They have won 5 successive Serie A titles. They are the UCONN Women’s basketball team, because honestly other than that one school with that hot blonde a couple of years ago (AC Milan and Ronaldinho) they really have no competition.

Now you're not thinking of women's basketball. Probably wondering why there are two number 4's on one team.

Barcelona – The other Spanish team, they have recently been overshadowed by their Madrid competitors. But with a revolving door of talented strikers, a rabid fan base, and an ideology of playing the game a certain, unchanging way they represent the arrogance and unabashed sense of entitlement that comes along with any black good hearted New England Patriots fans.

Tottenham Hotspurs – A spirited club, not used to playing with the big boys in the knock-out stage, the Hotspurs are a group hoping that recent successes are a sign of things to come. However, if history is to say anything, their recent success will not amount to anything. Have a good summer, Chicago Cubs fans.

Shalke 04 – Never mind that their name sounds like a hippie festival your aunt went to and came back with her life partner, it seems like every year this German squad sneaks into the tournament, usually earning itself an easy first round in hopes of giving a second round team a run for its money, but ultimately failing. Let’s see, blue and white color scheme, moderately successful every year but not to the point of reaching that next plateau reserved for champions, and crazy Germans? Sounds like the Dallas Mavericks.

Shakhtar Donetsk – I’ll save you the 10 second search; they are from the Ukraine. Yes, I’ll admit I don’t know much about this club. Since they are from Eastern Europe I’m going to assume their mascot has a uni-brow and wears gold chains and a dark blue track suit. You know who else no one cares about? The Philadelphia 76ers. Yeah, no one is going to wait up for them either.

He's got his jersey. What's your fucking excuse?